Paleo done best is at home with fresh food that you prepare yourself. Unfortunately, that is not always a reality. Trips, travel schedules, business meetings and long hours can cause you to slip back into your old ways. Don’t worry about it. It doesn’t have to be the end of the world.

But it also doesn’t necessarily have to happen. With a little pre-planning and foreknowledge, you can be prepared to Paleo on the go.

It’s not always the case that the boss comes in, says, “We need you at this place, like, yesterday,” puts you on a plane without so much as a change of clothes, and you find yourself out of your element. Most people have the chance to plan.

If you know where you’re going and where you’re going to be staying, you’re already ahead of the game. Get a hold of the hotel. Find out if there’s a refrigerator. Most hotels these days have a fridge, microwave and a coffee pot, particularly if it’s an extended stay hotel. Ask about their breakfast. Even a cold continental will have things like hard-boiled eggs and fruit.

Keep in mind that most hotels will not allow you to cook in the rooms. It’s not what the rooms are for and cooking in the rooms is very often against fire codes. It’s not something you want to do anyway. Hotel rooms aren’t great places to try to wash dishes. If you’re driving to your location, though, precooked food will go into the microwave nicely. And don’t forget the fridges are small. A lot of little Tupperwares take up a lot of space. I put my prepared meals into Ziploc storage bags. They take up much less space.

It wouldn’t hurt to take along a small pack with paper plates, paper bowls and plastic flatware. Not all hotels have those on hand, and it’s a little frustrating to realize you have food to eat, but nothing on which to eat it.

If there is a grocery store nearby, grabbing a few days worth of fresh food is not hard. Places like Safeway and Kroger stores have shredded rotisserie chicken, so you don’t have to buy a whole one. The produce department is a great place to look, and there are now Paleo foods in the freezer section. You’re going to want to pick up things like juice for breakfast because the juice in most hotels is full of sugar. Bottles of water are wise purchases because you don’t have to worry about the quality and flavor of the tap water. One 16.5 oz bottle of water will make one of those little pots of coffee in the room, and, of course, you’re going to want to be drinking it as well. I don’t tend to recommend deli meats, but high-end roast beef is good for a day or two. Peel and eat shrimp is also a great one to take along.

Two weeks after I started eating Paleo I was living in my car. Because it was a circumstance I knew was coming, I had a chance to prepare for it. I had already started looking for Paleo snacks to take to work or to eat in lieu of candy bars. Once I

had to move into my car, I already had a good idea of what I was going to buy to eat. Items like Lära Bars replaced candy bars, RX Bars stood in occasionally for lunch. I tested jerkies (Epic is good, and so is Old Trapper) and fruit sauces like GoGo Squeez. I could have two hard-boiled eggs, some jerky and a Bolthouse Farms smoothie for breakfast for next to nothing, and because I was living in my car during the winter, I could put food in the trunk of my car and it would keep nicely.

What do my homeless adventures matter to you? The items I learned I could eat and stay Paleo are great pack-along snacks to have in your hotel room, your briefcase, and your rental car. They can help you keep to plan when everyone else is munching on candy bars or granola bars during the business meeting. And when you just can’t live without the chocolate, Ghirardelli’s Intense Dark chocolates fall in line with both the Paleo and Keto eating plans. Just sayin’.

Okay, I get it. You’re not going to just want to eat food heated in the microwave. Once in a while, you’re going to want something that feels a little more “real.” One of my biggest problems with hotel living is the fact all of my food is nuked or reheated. Yes, I definitely want hot food sitting in front of me rather than a frozen meal or prepackaged finger food. 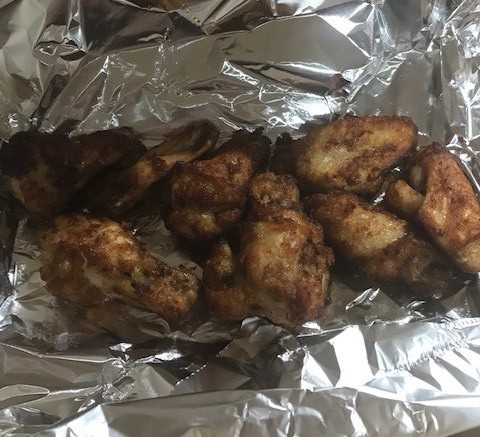 Go ahead. Do it. Hit a restaurant. If you’re concerned with staying on plan, look for something basic and not covered in cheese or sauce. A small steak with a salad is a great option, and, if you need more, throw in a potato or, better yet, a sweet potato, if you can get it. A place like Denny’s and Perkins where you can piece together your own breakfast are great as long as they don’t have a problem with substitutions. Can you have more bacon instead of hash browns or fruit instead of pancakes? Don’t want to leave your room. Try my favorite go-to. Dominos Pizza’s plain wings and a Caesar salad. The wings have nothing on them and are baked in the pizza oven rather than deep-fried. There are always options.

It’s getting easier and easier to find items that fit the Paleo lifestyle, and if you can’t find that, fall back on Keto. They are very similar. But, really, in the long run, don’t sweat it. Do the best you can with what you have and remember that Paleo is not about what you can’t have. It’s about what you do have.

The world will not end if you miss a Paleo meal. Neither will your diet.

Kelli Heitstuman-Tomko has a degree in journalism and is a published novelist. She has written on food, agriculture, business, crime and tourism. She has lived in Idaho, New Hampshire, Florida, Wyoming and Colorado. She currently resides in Fallon, Nevada. View all posts by Kelli Heitstuman-Tomko

4 thoughts on “Paleo on the Go”