I’ve been living two different lifestyles over the past year. One is at my parents where I have a full kitchen to work with. The other is multiple days at the hotel where I’m often the manager on duty, which forces me to stay there, sometimes for weeks at a time.

It is true that Paleo can be a very labor intensive way of life, particularly in cooking. When I have a kitchen to work with, I’m pure Paleo — meat, fresh fruits and vegitables, nuts and alternative flours.

But the hotel is a different story. I have a microwave and a small fridge and a tiny coffee pot. And it’s a life I’m fairly familiar with since I started 2018 homeless and living in my car. I describe the diet I followed then as “Paleo-ish” because there were certain aspects of it that were definitely not Paleo. Paleo or Paleo-ish, it’s what I have to fall back on when I’m at the hotel.

But, I do have a kitchen at home for cooking. Why should I fall back on a diet that can include processed meat, bottled drinks and prepackaged meals when I don’t?

There are a few reasons.

I’m a lousy meal prepper. I know people who get together with other people and they have meal prep parties. They’ll have two weeks to a month of meals prepared and ready to toss in the oven or take to work.

I am not one of those people.

I love to have a freshly cooked meal on my plate, and I will enjoy cooking it. I’ll even reheat some the next day. Maybe, and that’s a very firm maybe, I’ll reheat some the day after that.

Let’s add microwave food to this because that’s all it is — already cooked food that is frozen and is being reheated. Is it convenient? Yes. And some people like it. Just not me. So the problem here is that if I’m stuck in a hotel room with the likely probability that I’m going to be eating reheated food, I’ll order a pizza. Dominio’s is right across the street and they have my phone number memorized.

I Eat What I Call “Hotel Paleo”

Mind you, Hotel Paleo can get expensive. And this just doesn’t work for hotels. This is how I did things when I lived in my 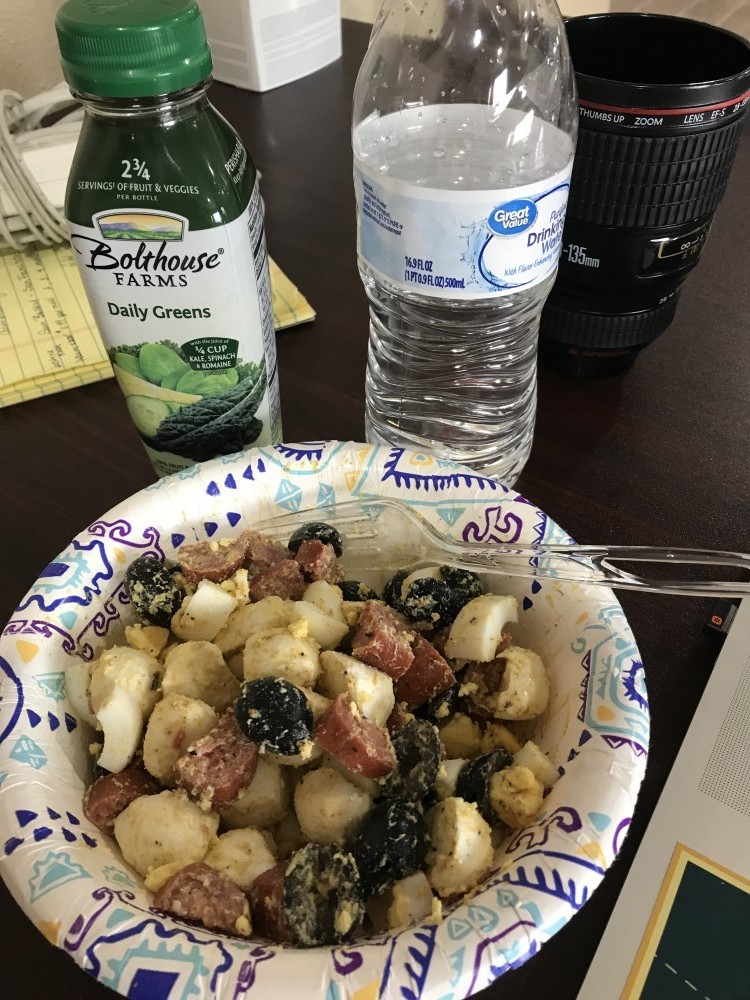 car as well. I fell back on stuff that was already made for me and was still Paleo. You’ll find many of those things under the “Favorite Things” tab in the top right-hand corner of this page. Bolthouse Farms smoothies. RX Bars. Jerky. Pre-made salads. Mozzarella pearls. Olives. GoGo Squeez. These are just a handful of things I’ve found that are either Paleo or Paleo-ish and can be stocked in my hotel refrigerator and drawers to serve me as meals.

There is also grocery store meals. Walk into any Safeway or Kroger and you’re going to find a hot counter with chicken and a few other prepared items. In larger stores, you’ll find a salad bar. When I was homeless, I worked as a merchandizer in both Safeway and Kroger, and I worked seven days a week. Every day I had either a baked chicken meal with two pieces of chicken, mashed potatoes and a vegetable, or I had the salad bar.

One of my other tricks was to eat out. Domino’s and Wendy’s were favorites. How did that work? I would go to Wendy’s, order a Son of Baconator with no sauces and a side salad. I’d toss the buns, cut the burger into bite-sized pieces, and throw it into my salad. My other go to is from Domino’s, and it’s not pizza. It’s their wings. Their plain wings are not breaded or fried like everyone else’s. They’re fun through the oven. So the fat you’re getting is the good saturated fat from the animal and not the bad saturated fat from whatever they’re frying the animal in. I order a Caesar salad with them.

Understand that this was not the entirety of my diet. I still get most of my meals cooked at home, and, even when I was homeless, I had temporary places to stay while I cooked my own meals. But, when living in cars and hotel rooms, where cooking is not an option, there are ways to stick relatively close to plan, even if you’re going to have to do it for a while.

For all of my talk about how I can’t do meal prep, it doesn’t mean I’m not pepared. For what? For a lot. I travel with an emergency kit in the back of my van. I have food, blankets, waterproof fire starters, a tent. I have an emergency tool kit with flares, jumper cables and a mini air generator in the event my car breaks down. I have a spare tripod for my camera, a Swiss Army walking stick and my snow brush and ice scraper back there as well. I’m prepared.

I also have a “hotel kit” that I keep in the back of my van. It has paper plates and bowls, plastic flatware, a small bottle of olive oil, picnic-sized salt and pepper shakers, a bottle of Garam Masala, and tiny canisters of tumeric and smoked paprika.  It goes with me every time I move into the hotel, even if it’s only for a day or two. If I’m staying more than a day or two, I’ll acutally unpack them.

What do I stock? Mozerella pearls or ciliegine. Tyson precooked chicken breasts or strips. Premade salads, hard-boiled eggs. Dry bone broth. Plastic-wrapped sweet potatoes. I’ll have Jimmy Dean breakfast sandwiches in the freezer, made with fritattas rather than bread or muffins. Johnsonville or Sam’s Choice smoked sausage because they have far less sugar or cornsyrup than Hillshire Farms. Delmonte has good fruit cups with the fruit in 100 percent fruit juice rather than syrup. In my drawers, I’ll have not-so-perishables like olives, GoGo Squeez (mango and banana are my faves), Ghirardelli Intense Dark chocolate bars and snack bars like RX, Epic or Lära Bars.

Breakfast is usually courtesy of Jimmy Dean. If it’s not a fritatta sandwich, then it’s a scramble, which can be found at any Walmart near the bacon. If I don’t have a fruit cup or a piece of fresh fruit, I have a Bolthouse Farms smoothie. And coffee. Always coffee.

Because this is not one of my big cooked breakfasts from home, I’m going to be hungry again in just a few hours. I’ll grab a GoGo Squeez to get me to the next meal, or perhaps a food bar.

Lunch will be a salad with maybe some extra meat from what I have in my mini-fridge. Today, I had to run home, so I brought some pumpkin sausage soup to have with my salad. I don’t tend to mind reheating soup.

After lunch, I was hungry again, so I made a little antipasto salad with mozzarella pearls, hard-boiled egg, olives and a little smoked sausage. I tossed it with olive oil, salt, pepper and turmeric.

That actually held me until dinner which was a salad from my fridge and wings from Dominos. At some point, between dinner and bedtime, I’ll probably have a food bar or a smoothie. Before bed, it will probably be a couple of squares of Ghirardelli.

I drink mostly water throughout the day, but I’m usually nursing a cup of coffee as well. If I need something with flavor, I’ll try to grab an Izze. They drink like soda, but they’re just fruit juice and carbonated water.

For dinner tomorrow, I have grilled beef strips that I plan having with a sweet potato on the side. I get plastic-wrapped sweet potatoes from Walmart in the produce aisle. They cook in the microwave in about seven minutes.

A Seamless Transition Makes a Difference

Because I live two lifestyles, the transition is very important. If I let that slip, it all goes to pieces. It becomes easier to eat a pizza and buy a Coke than eat the way I’m supposed to eat because I don’t want to reheat something I cooked two or three days ago. A weird hang-up I’m sure, but it’s enough to keep me off kilter if I don’t keep it in mind.

Over the first part of last year, I lost 50 lbs. and was pain-free. As I start 2019, I’ve regained that 50 lbs., and I’m remembering why I started down the Paleo road in the first place. How did that happen? I didn’t allow myself an easy transition between cooking at home and not being able to cook at the hotel. And given how much time I actually spend at the hotel, it was a recipe for disaster.

But, as they used to say on G. I. Joe, knowing is half that battle, and I know where I went wrong. But, I also understand that this plan works.

So I’ve fixed that little glitch, that uneven seam, so I can get back on track.